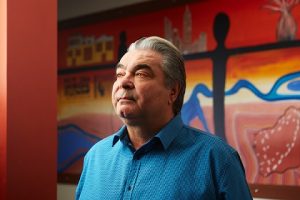 As a proud Aboriginal man, a father and a former teacher, I am dismayed to see WA Police Commissioner Karl O’Callaghan endorsing the Bill Leak cartoon as an ‘accurate reflection’ of Aboriginal parenting. This sickening stereotype promotes blaming and shaming of all Aboriginal people and further alienates our children from the police service in particular and the wider community in general.

The Commissioner is only well too aware that children’s offending behaviours can touch any family. To blame all parents would be assumptive, hurtful and ignorant of the complexities that lead to such issues arising.

It is only through working together and owning issues collectively as an entire community, will we be able to address the post-colonial struggles that confront us.

We are all in this together and it will take more than a debasing, divisive and discriminatory cartoon from a person who has previously depicted same sex couples as Nazi’s, Indians as stupid and now Aboriginal people as errant parents to sway us from our course.

I invite Mr. O’ Callaghan to start seeking solutions rather than scapegoats.