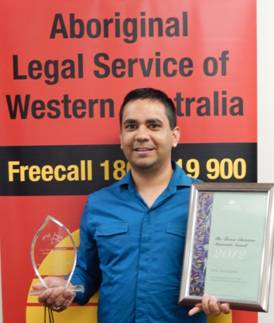 The Aboriginal Legal Service of WA (ALSWA) congratulates Dennis ‘Sorgi’ Eggington, the 2012 (Male) recipient of the Trevor Christian Memorial Award. This Award was initiated by the Commonwealth Attorney-General’s Department in 2008 to recognise the outstanding contribution made by an individual Aboriginal and Torres Strait Islander Legal Services (ATSILS) staff member.

With both Koori and Nyungar Cultural ties, Dennis ‘Sorgi’ Eggington commenced his career with ALSWA as a 17 year old trainee in 1998 before being employed by ALSWA in 1999, since which time he has worked in a variety of administrative and court duty roles. ‘Sorgi’ (a long-standing nickname), is a proud father who joined the Court Officer Unit as a fully trained Officer in 2007. By 2009 he had advanced to Senior Court Officer, at many times running the bulk of the load of the unit. Court Officers, all Aboriginal, represent Aboriginal and Torres Strait Islander peoples in the Court of Petty Sessions and the Children’s Court. Their authority to appear in court is comes from a Certificate granted under a Section 48 of the Aboriginal Affairs Planning Authority Act 1972 (WA).

His story and journey so far is one that is inspirational to other young Aboriginal people. To have completed his schooling and embarked upon a continually evolving and changing career path with ALSWA clearly indicates that he is a driven and hard working young man whose work is motivated by the benefits for his people.

ALSWA congratulates Dennis ‘Sorgi’ Eggington for this esteemed Award. His efforts are to be commended and ALSWA is proud to have this young man as part of its dynamic team.